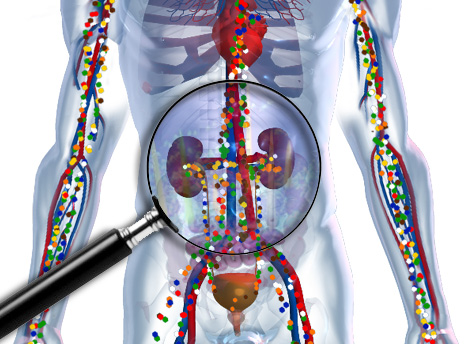 Diabetic  nephropathy  (zoafe  kulya  bawajah  ziabetes shakari)  is kidney  disease or  damage  that  results  as  a  complication  of  diabetes.  The exact  cause  of  diabetic  nephropathy  is  unknown,  but  it  is  believed  that uncontrolled  high  blood  sugar  leads  to  the  development  of  kidney  damage, especially  when  high  blood  pressure  is  also  present.  In  some  cases,  genes  or  family  history  may  also  play  a  role.  Not  all  persons  with  diabetes  develop this  condition.
Each  kidney  is  made  of  hundreds  of  thousands  of  filtering  units  called nephrons.  Each  nephron  has  a  cluster  of  tiny  blood  vessels  called  a glomerulus.  Together  these  structures  help  remove  waste  from  the  body.  Too much  blood  sugar  can  damage  these  structures,  causing  them  to  thicken  and become  scarred.  Slowly,  over  time,  more  and  more  blood  vessels  are destroyed.  The  kidney  structures  begin  to  leak  and  protein  (albumin)  begins  to  pass  into  the  urine.  Clinically,  DN  is  characterized  by  a  progressive increase  in  proteinuria  and  decline  in  GFR,  hypertension,  and  a  high  risk  of cardiovascular  morbidity  and  mortality.
The  earliest  clinical  evidence  of  nephropathy  is  the  appearance  of  low  but abnormal  levels  (>30 mg/day)  of  albumin  in  the  urine,  referred  to  as microalbuminuria,  and  patients  with  microalbuminuria  are  referred  to  as  having incipient  nephropathy.  Diabetic nephropathy  is  a  leading  cause  of  end  stage renal  failure.  The  pathogenesis  of  diabetic  nephropathy  is  multifactorial  with contribution  from  metabolic  abnormalities,  homodynamic  alteration,  and  various growth  factors  and  genetic  factors.  Epidemiologic  and  family  studies  have demonstrated that  family  clustering  and  ethnicity  plays  an  important  role  in  the  risk  of  developing  this  kidney  disease.
It  is  estimated  that  up  to  50% patients  with  diabetes  mellitus  will  develop  renal  failure2.  It  is  now  firmly established  that  diabetic  nephropathy  is  associated  with  high  morbidity  and  mortality3. There  is  marked  heterogeneity  in  the  clinical  picture  seen  in  long termed  diabetes  as  some  diabetic  patients  even  with  poor  metabolic  control may  not  develop  clinical  diabetic  nephropathy4.

Ancient  Unani  physicians  estimated  kidneys  as  pivotal  organ  and  zoafe  kulya is  a  secondary  disease  to  absorb  and  filter  the  urine  from  blood  i.e.  blood purification.  The  current  study  is  taken  for  the  first  time  and  considers  the assessment  of  the  scientific  validity  of  the  Unani  medicines  by  applying modern  parameters.
RISK  FACTORS  FOR  DEVELOPMENT  AND  PROGRESSION  OF  DIABETIC  NEPHROPATHY
Before  the  widespread  aggressive  treatment  of  blood  pressure and  hyperglycaemia,  between  25% and  40%  of  both  type 1  and  type2  patients  developed  diabetic  nephropathy  over  the  course  of25  years5,6,7 and  risk  factors  that  differentiate  this  subgroupfrom  patients  who  maintain  normal  renal  function  are  systemichypertension,  glycaemic  control, gender  (M>F),  genetic factors, hyperlipidaemia,  dietary  protein  intake  and  smoking.
Blood  pressure
Hypertension  is  much  more  common  amongst  diabetic  patients  thanin  the  general  population  and  has  been  identified  as  a  major risk  factor  for  both  macrovascular  and  microvascular  complicationsincluding  diabetic  nephropathy.  Total  cardiovascular  mortalityin  diabetes  is  strongly  associated  with  raised  blood  pressure,  particularly  in  type 2  disease.
Hypertension  is  strongly  associated  with  insulin  resistance, even  in  the  absence  of  diabetes,  and  some 40-70%  of  type 2  patients will  become  hypertensive  during  their  disease8.  Only  25% ofpatients  with  type 1  diabetes  are  hypertensive  and  many  of  these will  already  have  microalbuminuria  or  overt  nephropathy9.  Nevertheless,in  both  type 1  and  type 2  diabetes  with  overt  nephropathy  the  rate of  decline  of  renal  function  correlates  strongly  with  hypertension10,11 andin  microalbuminuric  patients  hypertension  correlates  with  thedegree  of  albuminuria12.  In  both  these  situations  antihypertensive therapy  is  beneficial.  Furthermore  in  normoalbuminuric  type1  diabetes  small  increases  in  blood  pressure  have  been  correlatedwith  the  subsequent  development  of  microalbuminuria13.  Therecan  therefore  now  be  little  doubt  that  a  raised  blood  pressureis  a  risk  factor  for  the  development  and  progression  of  diabetic nephropathy  as  well  as  a  potent  risk  factor  for  cardiovascular morbidity  and  mortality.
Glycaemic  control
Type 1  and  type 2  diabetes  have  in  common  the  state  of  chronic  hyperglycaemia,and  glucose- dependent  processes  are  likely  to  be  involved  in  the pathogenesis  of  diabetic  complications,  including  nephropathy.  Glucose- inducedtissue  injury  may  be  mediated  by  the  generation  of  advanced  glycated proteins  or  via  other  mechanisms  such  as  the  polyol  pathway,both  of  which  have  been  implicated  in  nephropathy14.  Consistentwith  this  hypothesis  are  observational  studies  correlating  haemoglobinA1c (HbA1c)  concentration  with  the  development  and  progressionof  microalbuminuria  and  overt  nephropathy13.
Proteinuria
Proteinuria  is  generally  regarded  as  a  marker  for  the  degree of  glomerular  damage:  the  level  of proteinuria  correlates  wellwith  the  prognosis  for  renal  function,  and  interventions  that retard  the  progression  of  diabetic  renal  disease  also  reduceproteinuria.  However,  we  do  not  yet  know  whether  the  flux  ofprotein  across  the  glomerular  basement  membrane  is  causally implicated in  the  evolution  of  diabetic  renal  disease  or  simplyreflects  glomerular  damage15.
Genetic factors
Genetic  factors  are  likely  to  be  important  in  diabetic  nephropathy.Recent  interest  has  focused  on  genes  of  the  renin  angiotensinsystem,  which  are  known  to  be  highly  polymorphic  and  have  been extensively  studied  in  relation  to  cardiovascular  disease.  Aninsertion(1)/ deletion(D)  polymorphism  in  the  ACE  gene  has  been identified  that  is  strongly  associated  with  raised  circulating  ACE levels  and  with  increased  risk  of  coronary  heart  disease  in non-diabetic  individuals.  Some  studies  have  found  the  DD  genotypeto  be  associated  with  an  increased  risk  of  diabetic  nephropathy and  a  rapid  decline  of  GFR  in  both  type 1  and  type 2  diabetes16.The  clinical  implications  have  yet  to  be  explored.  Other  genetic loci  that  may  be  involved  include  the  sodium—lithium  exchanger and  the  sodium—hydrogen  antiporter  genes.
Hyperlipidaemia
Hyperlipidaemia  is  common  in  both  type 1  and  type 2  diabetes.Raised  plasma  triglycerides  and  low  levels  of  highdensity  liproproteins(HDL)  have  been  correlated  with  the  development  of  diabeticnephropathy  as  well  as  with  cardiovascular  diabetic  complications5,17,18.  Triglycerideand  cholesterol  reduction,  although  important  in  reducing  cardiovascular risk,  has  not  been  found  to  alter  the  progression  of  renal  disease and  the  importance  of  hyperlipidaemia  remains  to  be  established in  this  respect.
Management
The diabetic nephropathy management is done with medicines due to which kidneys are protected and the blood pressure is lowered.  The kidney damage may be reversed and certain amount of urine can be found in the urine. If these medicines are used before the occurrence of nephropathy, it can be prevented in people who are having a normal blood pressure.  The focus of the diabetic nephropathy treatment is on managing the high blood pressure and slowing down the progression of hypertension. The protein in the urine is also reduced. A customized treatment plan will also be received. These treatments will include: