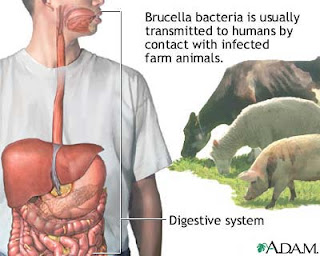 Brucellosis is transmitted to humans from infected animals. Its clinical features are not disease specific. Brucellosis has many synonyms derived from the geographical regions in which the disease occurs (e.g., Mediterranean fever, Malta fever, Gibraltar fever, Cyprus fever); from the remittent character of its fever (e.g., undulant fever); or from its resemblance to malaria and typhoid (e.g., typhomalarial fever, intermittent typhoid). Humans are commonly infected with the brucella organism through ingestion of contaminated milk or dairy products.
The disease spreads into the blood after ingestion and absorption from the gut. It reaches the lymph system and spleen which enlarge in an attempt to stop further progression of the disease.
During this reaction the patient starts to experience the characteristic bouts of fever.
The disease is not usually fatal, but the intermittent fevers (a source of its nickname, "undulant fever") can be exhausting. The patient maybe febrile for 4 months before remitting to develop fever one month later. Symptoms usually appear between five days and a month after exposure and begin with a single bout of high fever accompanied by shivering, aching, and drenching sweats that last for a few days. Other symptoms may include headache, poor appetite, backache, weakness, and depression. Mental depression can be so severe that the patient may become suicidal. In rare, untreated cases, the disease can become so severe that it leads to fatal complications, such as pneumonia or bacterial meningitis. B.melitensis can cause miscarriages, especially during the first three months of pregnancy. The condition can also occur in a chronic form, in which symptoms recur over a period of months or years.
Prevention:-
Drinking and eating only pasteurized milk and cheeses is the most important preventative measure. People who handle meat should wear protective glasses and clothing and protect skin breaks from infection. Detecting infected animals controls the infection at its source. Vaccination is available for cattle, but not humans.
Unani Treatment: