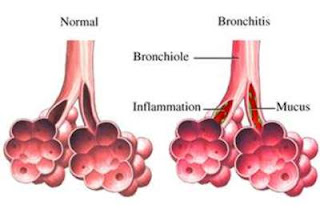 The bronchi are air passages connecting the windpipe (trachea) with the sacs of lungs (alveoli), where oxygen is taken up by blood. Bronchitis is an inflammation of bronchi causing excessive mucus production and swelling of the bronchial walls.
Chronic bronchitis is the term applied when coughing and sputum continues for 2-3 months and returns each year for at least two years generally lasting slightly longer each time. According to the Unani system of medicine ‘Sual’ or cough is an act by which body tries to remove the irritating substances from organs (lungs). The act of cough is performed by contraction and relaxation of chest muscles and diaphragm. Sometimes chronic bronchitis is associated with airflow obstruction and may be associated with breathlessness.
Causes
According to Unani system of medicine, chronic bronchitis is caused due to accumulation of excessive phlegm in the respiratory system that causes irritation to the sacs of the lung thereby resulting in cough. The incidence of chronic bronchitis is more in winter and spring season. It is more prevalent in males. Cigarette smoking is the most prevalent causative factor of chronic bronchitis. It rarely occurs in non-smokers. Environmental pollution plays a major role in the development of the disease especially excessive quantity of SO2, organic and inorganic dust.
Symptoms
Initially it begins with cough associated with expectoration of small amounts of sputum every morning. In this period the quality of life of the individual is absolutely normal. Gradually, cough becomes more frequent during daytime and even at night. The sputum, which initially was white in colour, may now become yellowish. At a later stage breathlessness and wheezing (a whistling sound produced while breathing) may be present. With the progression in the disease, the quality of life of the individual deteriorates. If the quality of life of the patient is such that he is unable to carry out the daily activities of living independently then he should immediately consult a physician.
DO’s
DON’T’s
Unani Home Remedies
The following preparations are useful in the treatment of chronic bronchitis:-
1) Leaves of Gaozaban (Onosma bracteatum Wall.) 4g, seeds of Khatmi (Althaea officinalisLinn.) 6g,       fruits of Sapestan (Cordia obliqua Willd.) 10 no., root of Mulethi (Glycyrrhiza glabra Linn.) 4g and fruits of Unnab (Ziziphus jujuba Mill.) 5 no. All the ingredients after boiling in 250 ml water, strained and sweetened with sugar may be taken twice daily.
2) Juice of Adrak (Zingiber officinale Rosc.) 12 ml with 12 g of honey two or three times a day.
3)  Powder of Kakda singhii (Pistacia integerrima Stewart ex Brandis) 1 part and powder of Balela   (Terminalia bellerica Roxb.) 1 part mixed with juice of Adrak and made into pills of the size of Bengal gram      can be taken two to three times daily.
4) One laung, Syzygium aromaticum (Linn.) Merrill & Perry with Paan leaf (Betel) twice daily.
5) A piece of Mulethi, kept in hot ash till it becomes soft can be chewed and the juice is swallowed, two to three times a day.
6) One part powder of Kakda singhii is mixed with equal part of powder of Sonth (Dried root of Zingiber officinale). 5 g of this powder may be taken twice or thrice daily.
7) Gaozaban (5g), Mulethi (5 g) and 24 g of Misri are boiled in water, strained and 20 ml of this is taken twice daily.
Compound Unani  Medicines :-